Magnus Carlsen is the reigning Chess World Champion, holding two out of three possible World Champion titles. He has long been working for spreading interest and enthusiasm for chess, as well as promoting critical and creative thinking skills through the organization First Move. To further promote interest for chess, we got together with the Play Magnus team as they were about to embark on new ventures. How could we make a chess app that could both leverage the possibilities we had by having Magnus a part of the project, as well as making chess easy and fun for both experienced players and those who had never tried chess?

As with any project we checked out the competition and what chess apps were already out there. On App Store alone there were a staggering 2000 different apps for the iPhone. That being said, there didn’t seem to be a lot of differentiation between them. Most seemed untouched by a designer’s hands, or they were overusing physical references like wood textures, 3D-effects, and perspective.

The good thing about chess games is the game rules are the same, so if you’ve learned to play one chess app it’s pretty easy to start using a different chess app. On the other hand, we also saw that many of the apps were hard to use for those who were unfamiliar with chess. They felt technical, and we felt the user experiences were mostly lacking in one way or another.

Early on, the idea of playing against Magnus had been decided upon. The same goes for the concept of choosing between Magnus’ ages to set the difficulty of each game. To create a chess engine that was tuned to play exactly like Magnus, we knew we had to work with someone with specific knowledge and experience with chess engines in apps. And so Tord Romstad, one of the developers of the popular Stockfish chess engine, joined us.

To further incorporate Magnus into the game, I came up with the concept of incorporating his personality using principles of emotional design. Just as our chess engine was custom built and made to play like Magnus, the visual look & feel as well as the personality of the app was made to mirror that of Magnus. A bold and elegant visual language was created to build the brand of the Chess Champion into the whole experience — in everything from the visuals, the illustrations, the style of photography to the tone of voice. 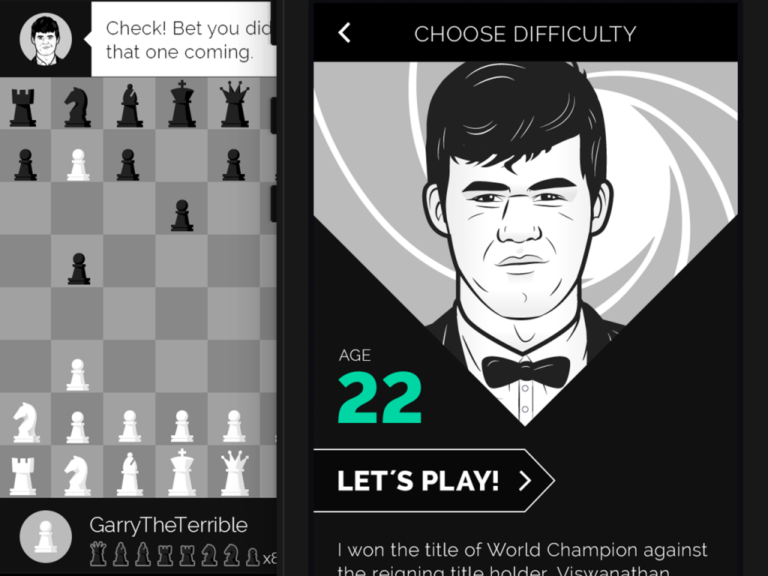 As mentioned earlier, we had custom illustrations of Magnus at each age between 5 and 24 done by Børge Bredenbekk at byHands. I personally wanted to challenge my illustration skills myself and spent some time on creating custom chess pieces.

Play Magnus has so far been a great success, with over 500.000 registered players, and around 10.000 active players every day. The app has been downloaded in almost every single country around the globe (still missing a few countries in central Africa and North Korea). But, even more importantly, we have helped spread the interest for chess around.

How about a game of chess?